As we approach our first test build of the revamped Project: Elysium, we felt it was about time to show off some of the latest screenshots and talk a little bit more about the game proper.

First; what is Project: Elysium?

The short answer is that it is an Action Role Playing Game (ARPG) with a heavy focus on survival, atmosphere and surviving deadly encounters. The game is set in the final days of an ancient empire, as the universe around them faces an apocalyptic cataclysm. As you take on the role of a Komthal acolyte Project: Elysium, your battle will be about more than your own survival; your actions, your successes and your failures will all decide the fate of a civilization in its dying days. Will the ancient race of the mahin, your countrymen who years ago betrayed you to death in a cold cell, be saved by your sword and sorcery? Or will you condemn them an eternity of horror for the sins of their emperor? 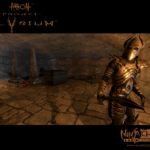 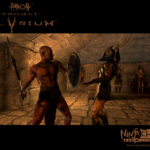 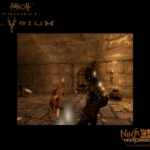 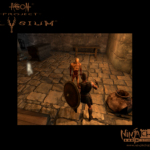 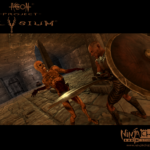 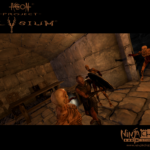 The First Step into the Aeon Universe

Our goals with Project: Elysium are twofold. First, we want to craft an immersive first step into our Aeon Universe, a look at the end of the Age of Creation as it leads to the formative era of chaos that will define the universe for thousands of years after. Within this frame, our players actions will influence the days to follow far after the last of their race fades into the histories.

Second; we want to craft an intuitive role playing system that focuses more on your actions and ability to adapt to your situation, rather than requiring you to make the ‘correct build choice’. Today, we’d like to talk a little bit about how we plan to do that without sacrificing what it means to build your own character.

The Aeon Universe is a project that will ultimately become a setting and system set within which we hope to tell stories across genres and media. As fans of both table-top and computer role playing games, we love lore rich worlds and flexible RPG systems that let us define every aspect of our creations.

With that said, a major limitation of our favorite genre has always been the concept of “the build”. The premise of many RPG’s is that we can create any character we want, and so engage in a challenge any which way we choose. Yet we’ve found that this isn’t quite true, as your character build forces you into a play style before you know what challenges lie ahead, or for that matter, which solution you might find fun. Furthermore, deviations from a single method are generally discouraged. If you’ve built for stealth, you’ll almost never be enabled to decide to duel anyone in a serious way later on. Likewise, a warrior might never be able to at least try a more cautious approach once in a while.

Suffice to say, we are keen to avoid  locking our players into a play style for the entirety of their adventures. We want the player to approach each situation and decide which solution is best for that moment, not be forced to find a ‘one size fits all’ answer to everything. Yet as noted, the fun of an RPG is in part the creation of a character that is  undeniably -yours-. The decisions over how strong, how fast, how smart your champion is makes them stand out, and that is just as important to us as player choice per-quest.

To that end, we are building Project: Elysium to merge the chance-based game play of classic role playing systems with the more action oriented control found in other genres. Game play will focus around three primary actions; Channeling, Combat and Rituals. Each of these three are heavily influenced by various stats chosen at the start (and improved over the course of) the game. More important than the numbers, however, will be how you engage. Success in combat will require good judgment in positioning, timing and your equipment. Meanwhile, Magic of any kind relies on an acute understanding of your environment.

Speaking of the environment; as part of our goal to create an immersive setting, we made it a point to ensure that the world reacts to your actions. Spells will wreck the walls, wood will burn and enable the flames to spread, and some spells will even create or block off areas. Our aim is to move away from the static world, and create one in which your more devastating spells will mark your passing.

Over the next few months, we will delve deeper into each of the three cores of the game. Keep your eyes open for news on our Twitter and Facebook pages, and remember to stop by our Threadless Store for some neat prints, apparel and accessories!