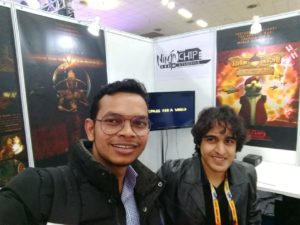 A familiar face made a cameo!

Today marked day one of the India Gaming Show 2019. We had a bit of a rocky few days leading up to it, but the response from all of you who came by more than made up for it! We’re humbled by the appreciation shown for our work, and the interest in Project: Elysium! We’d also like to give a special shout out to our old friend Deepak Sharma. It’s always a pleasure to catch an old team mate. Here’s a wave too to Ashish Ganju and Veraat Singh for all the help in getting things setup (evidence of them to come soon!).


As our visitors would have noticed, we were unable to put up the alpha test of Project: Elysium, due to a combination of hardware issues and some actual health setbacks that plagued us in the days leading up to the show. However, the alpha test is still in the works. We hope to have it ready in the coming month, and will be reaching out to those interested when it is ready. Until then, we do have two new trailers for the game!


There was also another deal we felt the need to alter. Prior to the show, we had announced that ‘Acorns Above: A World Gone Nuts’ would go on sale. This did not come to pass. The reason; we decided to make it completely free! We are still making the necessary adjustments to the Steam shop, but you can grab the Android build now over at the Google Play Store.

Keep an eye out for a special promotional offer on the Steam Store as well starting Tuesday!